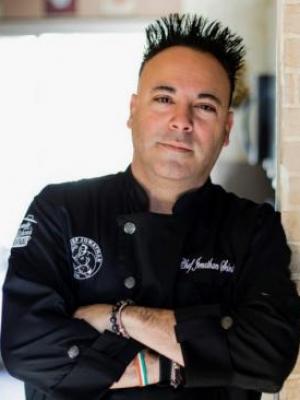 
Jonathan Scinto is a Chef, Food Artist, Entrepreneur, TV Show Creator and Host from North Bellmore, N.Y. The Long Island native utilizes his design background to create plates of art. He invented the cooking style "Itasian", a fusion of Italian and Asian flavors. Jonathan graduated N.Y.I.T with his B.F.A in graphic design. He landed a Client Services position with the top post production house in NYC called Post Perfect out of college, working with such A-list clients like the Sopranos, Back Street Boys, Mariah Carey, Linkin Park and Alicia Keys. Jonathan opened up "Home Cookin Café" with his father on Long Island that focused on scratch made ingredients with a farm to table approach. He sold the cafe in 2005 and joined the "Culinary Academy", where he developed recreational cooking classes for adults. In 2014, Jonathan decided to pursue TV and Entertainment to share his food point of view to a national audience. Jonathan is the creator and host of the TV series, "Family Kitchen Revival, streaming on Roku via GlewedTV. He's been seen on the Food Network, Chopped, FOX's MasterChef 6, Good Housekeeping Magazine, HuffPost, BuzzFeed, Newsday, Entrepreneurial Chef, Total Food Service and Preferred Health Magazine to name a few. He's raised hundreds of thousands of dollars for numerous charities and was honored by Schneps Communications with the prestigious Oscar like award called the "Vicki" as a top entrepreneur and philanthropist. Jonathan is a 5x WFC Competitor, 3x Taste of America winner for NY and in 2019 placed 3rd in the Chef Category at WFC Dallas. Jonathan's company JS Entertainment creates unscripted TV shows, social media content and the national touring interactive demo show, "Get'n Saucy with Scinto". FOLLOW ME: FACEBOOK @chefjonathans INSTAGRAM @chefjonathans www.chefjonathans.com