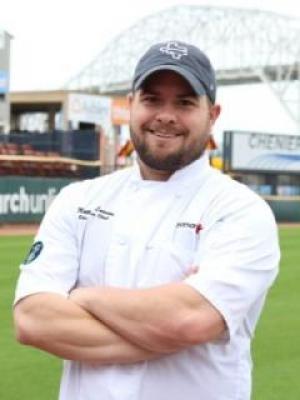 
Growing up in Dripping Springs, heart of the beautiful Texas Hill Country, Matthew Lawson was introduced and acquired a palette at a very young age for farm fresh produce and meats. From raising show animals in the FFA, or gardening with his father, Matt learned to appreciate fresh ingredients and using all that was provided. Directly out of High School Matt accepted a position working for nationally syndicated talk show host and best-selling author Dave Ramsey. While up in Middle Tennessee, Matt attended Middle Tennessee State University with a focus on Entrepreneurship and Business. In 2007 Matt decided to further his education as well as pursuing a dream of becoming a Chef by attending Texas Culinary Academy Le Cordon Bleu. After graduating top of his class and being voted class representative, Matt accepted an offer to work for the world-famous Walt Disney world in the culinary program at Artist Point in the Wilderness Lodge (Pacific Northwest fine dining cuisine). Walt Disney World has proven to be the base foundation as well as the expectation for how food, beverage and hospitality should be though any business or restaurant. Upon leaving Walt Disney World, Matt made a few toured spots through the United States including the position as Private Executive Chef for a Forbes Top 25 family in Ridgefield, CT, F&B Director and Executive Chef at The Prestigious Mayo Hotel in Tulsa, Oklahoma. And lastly working for the Houston Astro Organization as Executive Chef at Whataburger Field and Minute Maid Park during the Astros World Series run. His final stop has landed him as General Manager of Food and Beverage inside Cinnamon Shore, on the beautiful Island of Port Aransas, Texas.