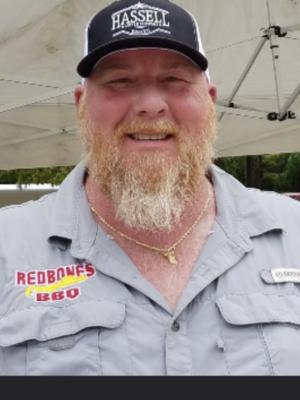 
I’m Russ Allen of REDBONES BBQ. I’ve been competition cooking since April of 2018. That first year we cooked 16 contests and finished up with a 5th place in the Alabama Barbeque Association Team of the Year points. Joined Bama-Q in 2019 and filmed season 3. Competed in 22 contests including 4 or 5 SCA events. Finished 4th in the ABA TOY points race and also won a first place steak finish in Decatur Al at the Riverfest festival. By winning that I earned my golden ticket to the 2019 World Food Championships in Dallas TX. Starting the 2020 season off with filming season 4 of Bama-Q Even with the COVID pandemic we managed to cook in 13 BBQ contests and 7 or 8 SCA events. With contests cancelling all over the state of Alabama,we had to travel a little more than we were accustomed to. Traveled to Georgia where we won our first Grand Championship, Mississippi, Florida, Tennessee, Indiana, Virginia, and Kansas. Earned enough points in the KCBS Team of the Year points race to be honored with a first place in chicken and 8th place in ribs in the world for 2020. Cooked in the KCBS World Invitational BBQ Contest in Kansas and was awarded our Team of the Year trophies at the end of the season banquet. Also finished up in 4th place again in the 2020 ABA TOY points race. So far in 2021 I have won my Golden ticket to the Steak Cookoff Association World Championship in Fort Worth, TX in steak and the ancillary category with a first place rib. Also won my 2021 World Food Championship Golden ticket with a steak win!! It’s been a heck of a ride and enjoyed every minute of it. This is the only hobby I know of that your fellow competitors are also your family. I have made friends all over the country that will last a lifetime. Sent from my iPhone