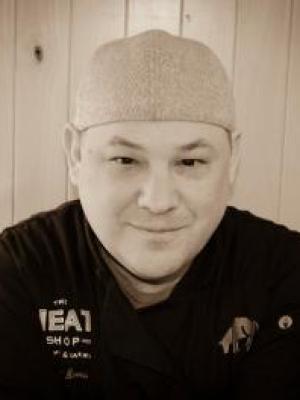 
Chef Keith Browning, currently Executive Chef, Butcher & General Manager of The Meat Shop, Lovers Lane, Dallas. Browning has been recognized throughout his almost 20 year culinary career for being a Visionary chef, in a diverse range of cuisine. He has a passion for family style dining, where guests interact in a relaxed setting. At his multi course wine & beer pairing events, he creates the perfect atmosphere for these moments. In the short year he has been at The Meat Shop, he has been able to host many of these delightful & delicious events, right in their back yard. Chef Browning is a graduate of the El Centro Apprenticeship program, where he served under Chefs and was awarded the honor of being the Executive Chef of the Werner Vogeli Endowment Dinner in 2001. Prior to embarking on his culinary journey, Keith gained valuable leadership and training skills from the U.S. Army Scouts. This gave him the tools and determination to become an effective trainer, motivational leader, and the ability to see & overcome upcoming obstacles, before they happen. Browning has taken & applied his unique skillset to a variety of venues; such as: Four Seasons Las Colinas, Brook Hollow Country Club, Mama Emilia’s, Cuba Libre, Bistro N-Nordstrom, Northwood Country Club, Urban Crust, Tuscan Slice, Bistro 115, & The Meat Shop. He has opened several successful venues and worked diligently to help improve the efficiency and excellence of every venue he enters. Chef Browning has earned & received numerous awards including: Silver medals as a team member of the Epicurean World Master Chefs Society Competition, London in 2002 & 2004, Texas Chefs Association Junior Chef of The Year for Dallas & The State of Texas in 2002, along with medals in over five other competitions.