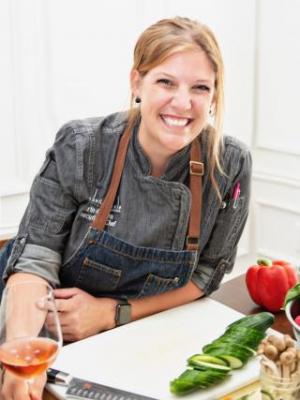 
Chef Erin Gillum hails from Northern Kentucky where she spent the first 8 years of her life getting to know food through her grandpa's homemade specialties like green bean goulash and strawberry pie. Though admittedly, his sauerkraut and homemade dumplings weren't her favorite at the time! From there, she moved to Indy, where she eventually fell in love with food and all things restaurant. She graduated from The Chef's Academy in 2009 while working at Dunaway’s Steak House and then really started her career at 94 West Steak House in Orland Park, Illinois. After moving back to Indy, she moved up the ladder at Mitchell's Fish Market, starting as a fish cutter and ending up as a supervisor and bartender. That's where she came to love all things seafood! Since then, she's worked as the kitchen manager at Titled Kilt, helping to open the Indy location and cranking out over a million dollars in sales during Super Bowl Week, and as the sous chef at A Cut Above Catering in Carmel. She then made the move to the sales side of the business and worked for Bon Appetit at Wabash College as the Catering Manager. After three years of crunching numbers and meeting with clients, she decided she needed to get back into the kitchen, where she belongs. In March 2018, Erin accepted the Executive Chef position at Spoke & Steele and worked with consulting chef, Greg Hardesty. A year later, April 2019, Chef Erin debuted her first personally curated menu at Spoke & Steele. She has shifted the structure of the menu to small, medium, and large plate format with focus on fresh, local, and organic meats, cheese, and produce and the freshest seafood available in the Midwest. “While I certainly love to eat and prepare Asian cuisine, I’ve included a little bit of everything on this menu from my beloved Asian to Southern to fusion, all with a little personal spin,” she says. Spoke & Steele has given Chef Erin the opportunity to spread her wings and show Indianapolis who she is and what she has to offer to this wonderful food community.