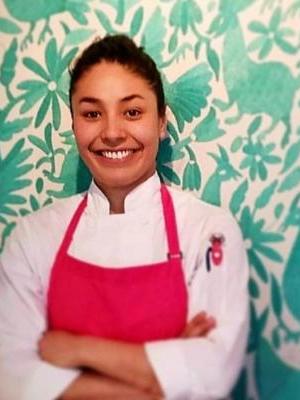 
Chef Fernanda Reyes aspires to revolutionize the American palette and give Mexicans far from home a fresh remembrance of the classic homemade flavor of Comida Casera. Now is her chance. Long before shaping Kansas City's contemporary Mexican cuisine, Chef Fernanda graduated in gastronomic studies from the Instituto Culinario de México, Campus Monterrey and later achieved a Masters in Business Administration and Nutrition of Foods and Beverages. At only 10 years old, Fernanda started learning every recipe of her mother's family restaurant in Durango Mexico and started forming her culinary style. Fernanda has more than 15 years experience transporting the flavors of Mexico around the world. During her culinary studies, participated in international culinary competitions where she received world renown recognition for her gastronomic performance with a Bronze Medal during the 2008 IKA Culinary Olympics in Erfurt, Germany and a Silver Metal during the Culinary World Cup at Expogast Luxembourg 2010. In 2015 Chef Fernanda moved to Dublin, Ireland where she continued her studies and worked at various local restaurants of diverse cuisines and learned the essences of French, Italian and Spanish dishes. With the intricacies of the European cuisines combined with the colorful flavors and textures of pre-Hispanic, colonial and contemporary Mexican cuisines, Chef Fernanda presents an unparalleled gastronomic experience in the form of Taco Naco KC. Chef Fernanda is also the Executive Chef of Cacao Restaurant, one of Kansas City's top Mexican restaurants, and helped bring the vision of a modern Mexican cuisine to Kansas City become a reality. On her free time, Fernanda enjoys to cook with her husband and play with her favorite dish, tacos, creating and innovating new concepts.