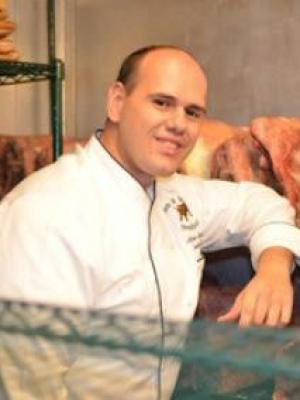 
Born and raised in Brooklyn, NY into an Albania family with a rich heritage of celebrating life through food, chef Alibasic recognized his passion to cook at an early age. He began his culinary career while working as a member of the kitchen prep staff at his uncle’s restaurant, Ben & Jack’s Steak House. Having the opportunity to observe the chefs and line cooks firsthand, not only gave Alibasic’s cooking skills an edge, but further galvanized his desire to become a chef. While exploring and excelling in the kitchen, Alibasic went on to pursue a higher education and decided to major in food science. His background in food science equipped him with a fresh outlook of how chemical elements group together to create something as complex as oil. This education inspired him to incorporate the science behind food, perfecting the art of dry-aging and adding more unique twists and ingredients to unorthodox dishes. Now, Alibasic has laid the foundation for his own cooking style based on simplicity of ingredients and richness of flavors; putting a new spin on the ordinary. Moreover, as a family owned and operated business, Alibasic understands the importance of giving back and enjoys donating his time to various charities which include: American Cancer Society, Sarcoma Foundation, and City Harvest to name a few.