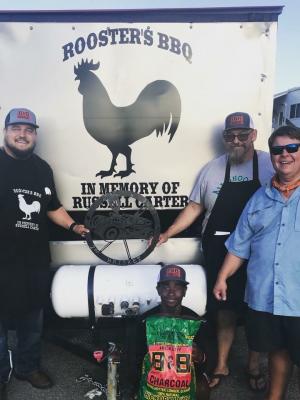 
BBQ competition team in honor of Russell Carter. The team consist of Russell brother Steven Carter son-in-law Cody Cook nephew Isaiah Carter and friend Steven Lewis. Russell May have left us to early but his love for BBQ continues with Rooster’s BBQ. We have been very fortunate to been invited to the American Royal Invitational as well as the Open category. We receiver our Grand Chapuon in IBCA at Groebeck TX. Our passion for competition as well as great BBQ continues to drive our team.