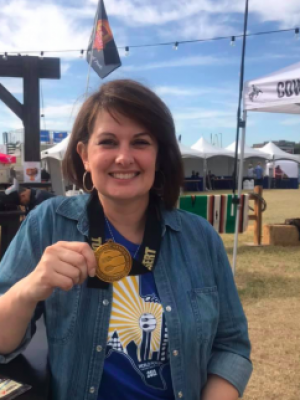 
Tiffany is returning to World Food Championships for the sixth time in 2021 and is hoping for her first category win! Tiffany's passion for baking was born when she and her mom sold baked goods at Denton Foods, a small-town grocery store in rural Denton, Montana, when she was in grade school. Over the years she has honed her baking skills and takes advantage of every opportunity to learn something new about the culinary world. She caught the competition bug in 2013 after being named a finalist in the Pillsbury Bake Off. In the years since, this self-taught home baker has placed in more than 40 national and local recipe contests with more than a dozen grand prize wins totaling over $100K in cash and prizes. In 2018, she won earned her first Top 10 WFC Dessert finish, ultimately placing 2nd thanks to earning the only perfect 100 score in the Signature Dish round. In 2019, she landed in the Top 10 for the second time, earning a 9th place finish. Tiffany hopes to add a World Dessert Championships win to her resume in 2021 when she brings the "A Team" and her "A Game" to Dallas!