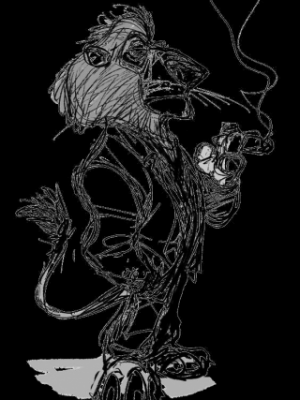 
“This chef, he’s the king of the jungle, huge knife out to here. He’s laying down a table, in the middle of the kitchen. He’s so good. So hot. He doesn’t want to move. Now, the little chefs come they start messing with him, biting his food, nipping his drinks, he doesn’t do anything. The server she starts messing with him coming over making trouble, still nothing. Now, the other chefs they notice. And they start to move in. The jackals, hyenas, they’re barking at him, laughing at him. They use his tools, and eat the food and get in his domain. They do this, and get closer and closer and bolder and bolder ’til one day, that chef gets up and tears the shit outta’ everybody. Cooks like the wind. Grills everything in his path, ’cause every once in a while, the chef has to show the jackals, who he is. It’s too late to be scared. It’s time to kill.” “Don’t beat them kick their ass.”