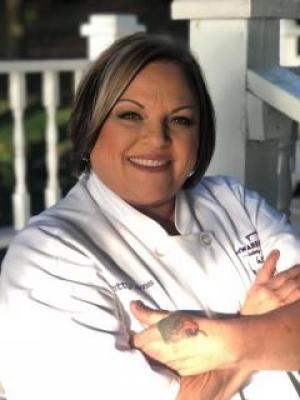 
Patricia Clark, who goes by Patty Cakes professionally, has a life-long passion for baking and cooking. Patty first realized that she had a real talent for this at age seven when she won blue ribbons for her brownies and snickerdoodle cookies at the Placer County Fair in Roseville, California. From the modest beginning her passion carried her through culinary school and apprenticeship. She is now a solid part of the culinary scene in the Mobile, Alabama area. Patty Clark’s back ground and experience allowed her to bring a unique blend of southern tradition with a California flair. She now lives in Coastal Alabama having come from various culinary positions in California’s capital city of Sacramento, where her desserts were featured in the Best of Sacramento magazine. Currently based in the unique community of Fairhope on the Eastern Shore of Mobile Bay, Patty is the Pastry Chef and Bakery Manager at the award winning Warehouse restaurant. She is known for creating unique and traditional baked goods such as French Macarons, Chocolate Ganache’ cakes and the regional favorite, Triple Coconut Cake. Equally popular are her custom wedding and specialty cakes which have been featured at receptions at the Grand Hotel at Point Clear, Mobiles historical Battlehouse Hotel and more beachfront condo parties then anybody can count. Patty is a Certified Culinarian and has competed in culinary competitions both in the California Nevada area and in the South East, most recently in Pensacola, Florida in the Culinary Fight Club competition. And she won a Golden Ticket to compete in the World Food Championship in the dessert category to be held in November. She would like to touch your heart and soul through your palate.