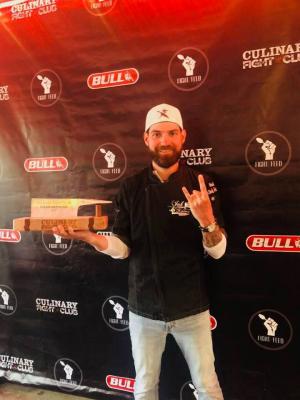 
I am a competition chef who owes my love of cooking and food sport to my mother. I have competed as sous chef with her for 3 years at WFC which included a 2nd place finish in bacon in 2015 and 1st place in 2016. I have since branched out on my own as owner and head chef of Ink&Knives Bacon Jam and have competed and won several competitions around the country, including Burger Bash in Detroit, MI which won me into WFC as a head chef for the first time in 2017. I have also competed and won Culinary Fight Club battles including the Blended Burger Battle in Charlotte, NC in 2018 as head chef and assisted in the overall Culinary Fight Fest winning dish in Chicago, IL This year I am bringing the I&K flair to sandwich. Ink&Knives has a taste for victory and looks to continue the run in Orange Beach.