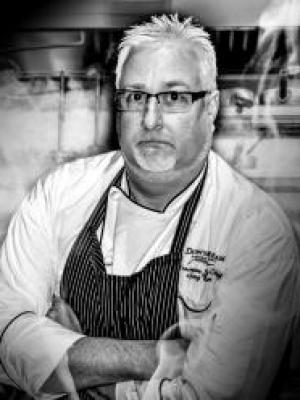 
The Beginning Long before Greg Bolton became the Executive Sous Chef of Downstream Casino Resort and earned the name “Mouth of the South,” Greg had to earn credibility in an area which prides itself as some of the richest flavors in America, the South. Greg was born in New Albany, MS on April 20, 1967. You may not be able to say he was born with a silver spoon in his mouth, but he was born with a ladle in one hand and spatula in the other! It is in his blood to be a chef. His mother and both paternal and maternal grandmothers were great chefs and had a tremendous influence on his culinary experiences. His mother opened her first restaurant when he was in the 4th grade at Mattie Thompson Elementary School in New Albany. He says, “I can remember to this day the exact seat I sat in in Mrs. Grisham’s 4th grade class. It was the one closest to the door so I could get out faster, get on my bicycle and ride downtown to go to work for my mother at her restaurant, Cotton Street Fountain, an old time soda fountain with homemade soups and sandwiches.” Washing dishes and cleaning up the kitchen was his first experience in a commercial atmosphere and he fell in love with it immediately. He worked in his mother’s restaurant every day that he was not in school and it was open. He even remembers the very first time that he was allowed to stand on a milk crate and dip his very first ice cream cone. Greg’s Mom later opened a second restaurant, Coulter Cottage, which was a fish and steakhouse serving fresh Mississippi catfish, oysters and hand cut steaks. It was not long before they were known for the amazing hushpuppies that were served with every meal. After attending college, Greg and his mother helped open Taylor’s Place, another fish & steakhouse that is still in operation under new ownership. Not surprisingly, Greg followed in his mother’s footsteps and continued to help her with the catering of special events. His entire life, he has always been involved in the foodservice industry in some manner and felt it was time for him to start his own legacy. He opened his own restaurant in 2000, Tall N’ Shorty’s, and later added Tall N’ Shorty’s Shrimp Shack in 2003. Unfortunately, the business was lost due to a flood in 2007. Greg continued to do private catering for an elite clientele base, until joining the Culinary Staff at Downstream Casino Resort in 2013. Shortly after starting at Downstream Casino Resort, his talent became apparent. Due to his hard work ethic and flair for new and creative dishes, he quickly rose to the rank of Executive Sous Chef in 2016. Greg’s background provided the fuel, but it was his bold and southern “Mouth of the South” attitude lit the fire and led the way for his success as a culinary expert. Some of his highlights as Executive Sous Chef has been producing his own YouTube and Facebook video series, “Chef Greg’s Kitchen,” and becoming a local TV personality. He is booked on many local TV programs, including KSN Channel 16’s “Living Well,” which is a monthly regular appearance. Greg was featured in the Downstream Casino Resort Battle of the Chefs event, versus celebrity Chef Frankie “The Bull” Terzoli. What started as a two show, one night event, grew to an encore performance the next day. All three shows were put on to a sold out crowd inside Downstream’s Red Oak Steakhouse. Chef Greg won all three events, which were judged by the patrons that came to the show. Both Chefs were judged on appetizers, main entrée, and dessert. In addition, Greg has also had the privilege of cooking for several of the celebrities that perform for the Downstream Casino Resort Summer Concert Series, including Sammy Hagar. He has also qualified for “World Food Championship 2018 Top Chef Challenge,” in Orange Beach, Alabama. Greg has won the Culinary Award of Excellence at the annual “Taste of Grand” event for three consecutive years. This includes a “Supreme Cuisine Taste of Grand” award in 2015 and the “People’s Choice Award Taste of Grand” in 2016. During the annual “Black Elk Brisket Burn Out” event, Greg was awarded the “People’s Choice Award as well as multiple first place winnings in several categories in 2014, 2015, and 2016.