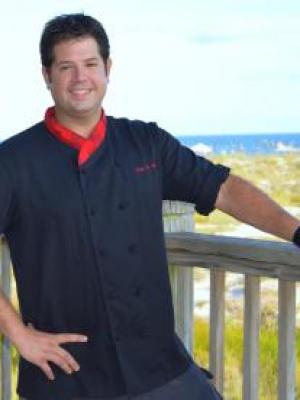 
Lee Bell has been working as a chef in the Southeast United States, the Caribbean, and the Gulf Coast for the last 15 years. As an Executive and Corporate Chef for the Harbor Docks Corporation, Lee was responsible for opening and maintaining several award winning restaurants including Chuck’s Fish (Tuscaloosa) and the FIVE Bar. He also opened his own Prime Steak House and Sushi Bar (TWIN) in Tuscaloosa with his identical twin brother (and sushi chef) Reeves Bell. Before joining Spectrum Resorts in the summer of 2016, Lee worked as an international restaurant consultant in Port au Prince, Haiti. He opened several food production facilities and a Manhattan style Italian Restaurant in a third world country. Lee’s cuisine focuses on French fundamentals with Caribbean and Thai influences. He was recently honored as the Alabama Restaurant and Hospitality Alliance’s 2016 Hospitality Manager of the Year. He was a top ten finalist in the World Food Championships Sandwich Competition in 2016. He was also a top 10 Finalist in the World Chef Championship in 2017.