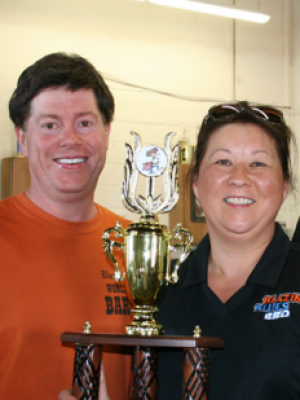 
As head cook of Blazin' Blues BBQ, Dan Richard usually spends his weekend's either competing in competition BBQ and/or dreaming about food! While a professional software salesman during the week, his family heritage is to cook. His mother is his culinary inspiration and owned operated several restaurants (known for pie!), and his Dad was a self-taught butcher and owned an independent Super Market. After placing 24th in 2013 WFC BBQ, which included a top 10 Rib, Dan and his wife, Janice, became the world's biggest fans at the WFC cheering on their favorite BBQ teams and experiencing a whole new world of culinary competition which included Bacon! So when the 2014 WFC Super Regional came to Murphysboro and included bacon, we had to pull out Mom's cookbook and accept the challenge. And its been a blast! Can't wait for 2018!