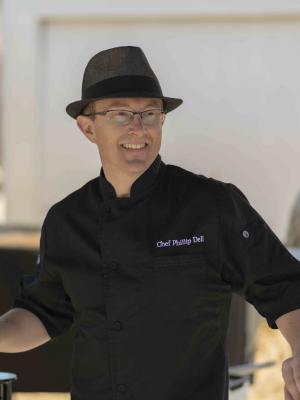 
A young boy sits in front of the television watching his favorite cartoons on a Saturday morning—a typical scene played out in most households. Not so for me. I traded Bugs Bunny for chefs like Martin Yan and Justin Wilson and filled my Saturday mornings with cooking shows on PBS. As I grew up, my love for all things culinary only grew stronger. At an early age, I realized my life would revolve around food—all I wanted was to become a chef. Whether it was helping my mom decorating a cake, baking, or making dinner, I was there. By the time I was 8, I was making 3 and 4 course meals for my family. At the end of summer every year, I stayed with my grandparents to help with the annual pig roast put on by my grandpa and uncle. That’s where my love for barbecue really started to develop. After acquiring a Certificate of Culinary Arts at Traverse Bay Area Career Tech Center and a degree in Baking and Pastry Arts, as well as a minor in Nutritional Science, from the prestigious Johnson & Wales University in RI, I spent several years competing and winning in barbecue contests in the Midwest, including Minnesota in May. After life circumstances took me out of professional barbecue for over a decade, I returned to the circuit in 2013 and have spent the last several years honing my skills and refining my flavor profiles to please the palates of the West Coast. Professionally, I went from being a butcher's helper at Deering's Meat Market in Traverse City, MI before college to Pastry Sous Chef at Wynn-Las Vegas several years after college—all prior to developing an upscale private chef company, Sin City Chefs, and CPD Enterprises, a culinary consulting and catering firm. Most recently, I ventured into the food truck scene, opening Fusion Beastro, an elite gourmet food truck. Since opening in 2018, Fusion Beastro has been featured multiple times on the Cooking Channel on shows such as, Carnival Eats and Carnival Kings. In its first year, Fusion Beastro also received the “Best Food Truck” award twice at the Great American Foodie Festival (Spring/Fall), as well as being noted for having one of the “Best” food trucks in Las Vegas, by the Las Vegas Review Journal. Throughout my lifetime, I have earned numerous awards, including the title "Chopped Champion" on the Food Network's Chopped "Cook Your Butt Off" competition, National Educator of Excellence by the National Restaurant Association, and 2016 Teacher of the Year by the Nevada Cattlemen’s Association. And, in 2017, I was a 3-time award winner at the Jack Daniels World Barbecue Invitational competition in Lynchburg, TN. Additionally, I love to spread my passion for food through teaching classes, and being a regular on SOS radio (SOSradio.net). The smoke rarely clears, and the fire never gets cold for me, but you can bet that when it does, you will see me outside grilling, or, in the kitchen, cooking next to my amazing wife, Leah.