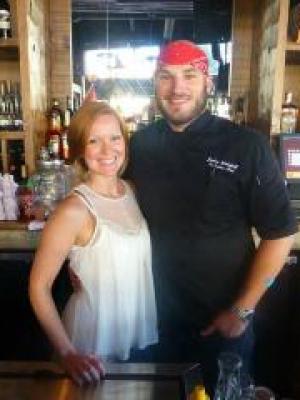 
*Winner of Food Network\'s; Guy\'s, Grocery, Games*\r\n*Appeared on Food Network\'s; Beat Bobby Flay*\r\n\r\nGrowing up in Lawrenceville, Ga., Wakefield was immersed in a world of diverse culinary cultures. His mid-Western mother taught him how to prepare meat and potatoes, as well as her “famous dishes” including spaghetti, pork chops and meatloaf, and his Tennessee-born father provided Wakefield with his love for Southern culinary traditions. In addition, his grandparents owned one of Iowa’s most successful bakeries. As a result, he first learned the tools of becoming a great pastry chef. This foundation led Wakefield to his love for all things culinary, where he took his first job at the age of 14 at a casual Italian restaurant. During his time there he crafted several dishes from scratch, surprising not only diners, but also, his superiors in the restaurant. A few years down the road Wakefield went on to attend Le Cordon Bleu in Atlanta, where he took a coveted three month externship at the exclusive Homestead Resort in Hot Springs, Va. His culinary superiors asked Wakefield to stay on following his externship, and he worked his way up to the position of junior sous chef, where he was responsible for developing and preparing the extensive appetizer selections, and serving the 400 to 1,600 people who dined at the resort nightly.\r\n\r\nMissing his hometown, Wakefield decided to move back to Atlanta, where he began working as a lead line cook at the acclaimed Spice Market, under the tutelage of internationally heralded chefs, Jean-George Vongerichten and Ian Winslade. The owners of Food 101 quickly recognized his talent and hired him as executive sous chef at Food 101 in Sandy Springs. Wakefield’s talent of combining Southern food and sensibilities to create cutting edge cuisine became highly praised and he was soon promoted to executive chef of Meehan’s Public House in Downtown Atlanta. Soon after he was named corporate chef of Meehans Public House. Between Jordan’s extensive training, skill and hand-picked kitchen team, he has taken Meehan’s fare to the next level, and in 2013, he was ready to embark on his latest venture with Food 101, Smoke Ring, which will serve up his very own take on “Georgia-Style Barbeque” in Atlanta’s Castleberry Hill community. \r\nJordan and his wife, who he met while she was a bartender at Meehan’s Public House Sandy Springs, are the owners and operators of Smoke Ring. Long time fans of all things Southern and barbecue Jordan and Erin enjoy to spread this love through the neighborhood of Castleberry Hill that they have now called their second home.