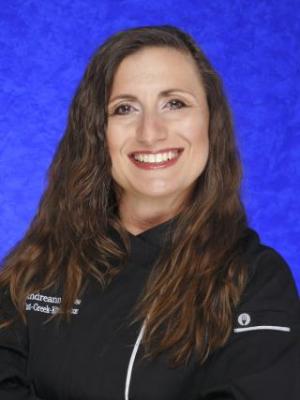 
Andreann is experienced in the world of Food Sport. Starting with her win on the hometown favorite episode of Ultimate Recipe Showdown 2 on Food Network, she has since appeared on the cooking channel and shared the stage with celebrity chefs such as Guy Fieri, Fabio Viviani and Aaron McCargo Jr. She enjoys competitive cooking as well as judging and is a South Carolina Barbeque Association Ambassador, Senior Judge, and Novice Instructor. Her dishes have been served at large events such as NYC Fashion Week and Bon Appetit Supper club, and she has had many recipes published in multiple magazines. She has cooked for Cal Ripken Jr., Marilyn McCoo, Billy Davis Jr, Elise Testone, Mac, Arnold, The Bronx Wanderers, Ken Lavigne, The Movin Out Band and Manhattan transfer just to name a few. Andreann also loves sharing her recipes and knowledge about food and took the stage to do a cooking demonstration at last years WFC event. She was a judge for Chili in WFC 2015 and competed at WFC for the first time last year and placed 11th in bacon, missing the top ten by less than a point. Andreann says “I am proud to be competing with such talented people and happy to call them my friends. We all love food sport and are like a big family. I learned a lot from last years competition and will be using all I learned to win this year”