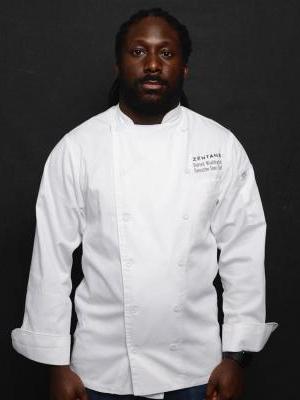 
I'm Executive Sous Chef at Zentan restaurant in Washington. Where I cook authentic Japanese cuisine. I'm a husband and father any spare time I have it all goes to them. I'm from Washington DC born and raised as child I had pretty rough up bringing. Being raised by my mother and I had two younger siblings not to far any age that I had to look after. Through my teen years life wasn't getting any better and I wasn't trying make it better neither. Well Failing the 10th grade and dropped out high school I though I was real man. Not until I was 23 that I wanted to cook. I've tried many other things prior and those things did not pan out for me. 2009 I started working in my first kitchen as prep / dishwasher. I've been cooking for 9 years professionally working for Celebrity Chef Bryan Voltaggio in 2012 where I learned essential how to cook. I've met and had the chance to work with some great chef that know food. Food isn't just something we consume in our bodies but it's artistry of fine culinary excellence.