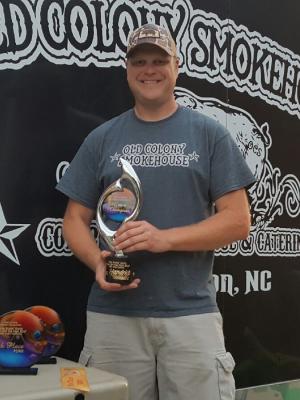 
Old Colony Smokehouse Competition Barbecue and Catering is based out of Edenton, North Carolina. 2017 is their second full season competing on the professional circuit. Although they're still relatively new to professional BBQ, they are not new to producing great food. Pitmaster Adam Hughes is a former restaurateur and caterer with many years experience in satisfying big appetites. In addition to being a cook, Adam is also a KCBS Certified BBQ judge. Along with competition BBQ and catering, the Hughes family operates a 3rd generation family owned butcher shop which specializes in whole-hog butchery and has been in business for over 30 years. Their BBQ has earned multiple awards for chicken, ribs, pork, and brisket as well as several Top 5 overall finishes in their first two years of competing. Old Colony Smokehouse competes primarily in the Mid-Atlantic region of the United States. Team sponsors for 2017 include Grill-Billies BBQ Supply, Swamp Boys BBQ Sauces & Seasonings, Sweet Smoke Q Injections Sauces & Smokers, Mojobricks Wood Products, and C&J Country Meats. Find out more by liking Old Colony Smokehouse on Facebook at facebook.com/oldcolonysmokehouse and on Instagram @OldColonySmokehouse