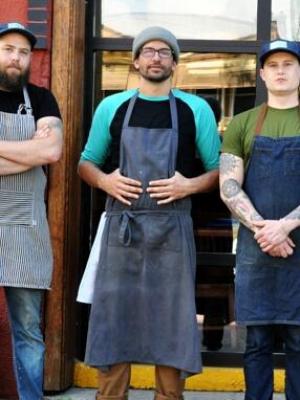 
It all started for me when my step father tossed a young lazy teenager into the dishpit of a hotel in northern Connecticut. While the intitial job duties were aweful, I instantly fell in love with the industry. Eventually moving to Maine I was blessed to be apart of some amazing crews and openings at Chef Rob Evans's Duckfat and Chris and Paige Gould's Central Provisions. My time there taught me so much more than food and technique. I learned to respect food and where it came from. Working hand in hand with local farmers, foragers, fishermen, and ranchers the full scope of food and its conectivity became apparent and all important. I took those lessons and philosophy with me when I moved to the north west and starting working for Chefs Greg and Gabbie Denton at their acclaimed restaurant Ox. In my time there they were awarded the Beard award for best chefs NW. With their support and that of all of my many mentors along the way I was able to pursue my own chef collective pop up group Wildfire Pdx. We look forward to representing the north west, mid west, and east coast in the upcoming W.F.C.