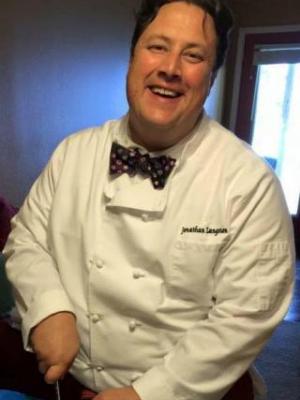 
Chef Jonathan M. Langston began his love of cooking in southern roots; he learned at his grandmother's elbows in her kitchen in Chilton County, Alabama. For more than twenty five years, he has combined his love of southern ingredients and methods with those of French, Italian and Caribbean techniques. He has worked for masters of the trade, such as Frank Stitt (Highlands, Bottega, Chez Fon Fon) and Carole Griffin (Continental Bakery, Chez Lulu) in his hometown of Birmingham, Alabama. He has also worked as the Executive Sous Chef of the Pier House Resort in Key West, Florida, practiced his craft at some of the best regional restaurants in the southern U.S. and became the chef/owner of a personal chef business in Charleston, South Carolina before owning his own restaurant on Lake Mitchell in Clanton, Alabama. Presently, Chef Jonathan manages the Recreation Center for the City of Orange Beach where, in cooperation with the city's Coastal Arts Center, he began a children's culinary camp, introduced culinary arts into the after school arts program and provides monthly themed cooking classes for adults. Chef Jonathan is a newly wed who fell in love with his wife, Jessica, while she worked at the Coastal Arts Center--creating children's classes and ultimately, Culinary Art Camp so that she would notice him. It worked! They had their first Culinary Art Camp meeting/six hour dinner date on June 16, 2015, married in July 2016 and have been cooking and creating together ever since. Jonathan is also the General Manager of Bleus Burger in Gulf Shores, Al. Bleus Burger began as a gourmet food truck in November 2014 that has now developed into a full service restaurant specializing in gourmet hamburgers and many other offerings out of an entirely from scratch kitchen.