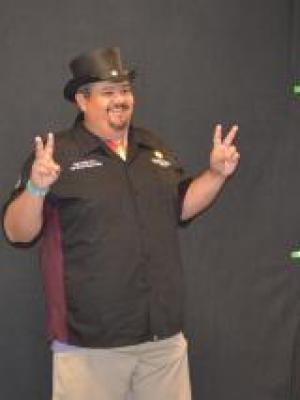 
The Half Baked Hippies, came to be when our first backyard competition required a team name, David asked Jamie what she thought a good name would be and it was Half Baked Hippies!! It was a hit and we have run with it from there. We have out Tie Dyed shirts, hats, table cloths, our Shroom table décor with a candy dish for the public to snack on when the have the munchies. Jamie and David started cooking together in 2009, when David’s Dutch oven teammate was killed outside of Reno NV by a drug impaired driver. Jamie came in and has been a great fit since. In 2010 the duo was told that the real challenge of competition cooking was BBQ competition, so when the chance came they took it and have been hooked ever since. Over the past couple of years the team has had some success, but there is more to come. www.halfbakedhippies.com \r\n2014 WFC Recipe Champions\r\n2015 WFC Recipe Top 10\r\n2016 WFC Recipe ????