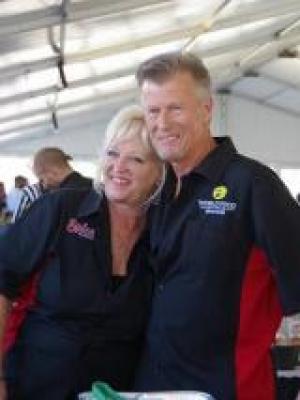 
Robert is a self taught cook that has been participating in culinary competitions since the late 1990's starting with BBQ and winning many trophies over the years. He has been named #2 in the state of Alabama in Wild Game 2 times by the Alabama Wildlife Federation, Robert took the Grand Prize in a Food Network Chili Challenge in Nashville and finished 6th in a national Rub contest held at the Bristol Motor Speedway. 2016 WFC Seafood ranked 11th, 2017 WFC Seafood ranked 9th. He has also won awards for his Sauces. Robert jokes "My wife says I'll smoke the rubber off a spare tire if there is a trophy involved". His passion is creating food that people enjoy with flavors that are outside the box of what they are accustomed to tasting. Robert and wife Lynn have been married 36 years and enjoy competing together. Lynn has managed their successful catering business for 16 years. Robert and Lynn also developed a spicy cracker that they are now distributing in 8 states. God has blessed us, Robert said, and I feel it is important to use my talent to help others by Volunteering with Operation BBQ Relief and many other local non-profit projects. They are both excited to be back at WFC 2018!