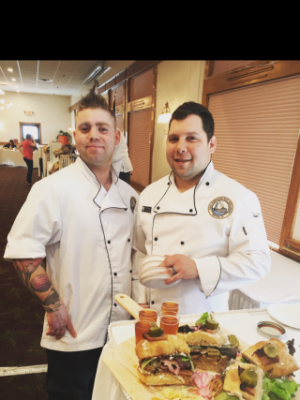 
Matt MacDonald and Seth Chiado are two Culinary Specialist in the United States Navy. Seth Chiado graduated from Johnson & Wales in 2007 and worked in various restaurants throughout Colorado Springs, Colorado. On January 12, 2010 Seth shipped off to boot camp and begun his career in the Navy. Since then Seth had served aboard nuclear powered fast attack submarines and currently is the food production chief at one of the Navy\'s largest east coast dining facilities. Matt MacDonald A graduate of Green High School worked various jobs while living in Ohio before heading to boot camp for the Navy in March of 2011. Since then Matt was stationed on a Ballistic Missile submarine and is currently a store room supervisor in charge of all all of ordering, receiving and inventories of all provisions that are used on a daily basis for food production at the Cross Hall Galley in New London. Matt is currently a student at Johnson and wales studying culinary arts and Food Service Management.