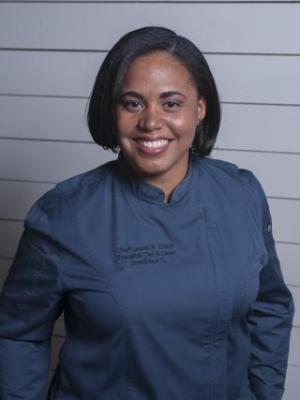 
My name is Chef Laurel R. Elliott . I am the Executive Chef/ Owner of OneBiteATL which is located in East Atlanta Village. I love everything about food: The origins of food, The Art of the Creative Culinary Process and the effect that amazing food has on people. Food is simply enchanting. As a Chef/ Foodservice Operations Consultant with over 12 years’ experience in the Foodservice/ Culinary Industry, I have had the opportunity to create concepts for clients and travel to different parts of the world to create menus and write recipes. I have always been inspired by international flavors. I originally hail from the beautiful twin island republic of Trinidad and Tobago and my multicultural background has afforded me the opportunity to craft a unique perspective on food which I aim to share with the world. My mom, Roslyn and my dad, Lennox both appreciate food in both its simplest and more complex forms. As a result of this, every meal in my household was an amazing experience. Attending the Art Institute of Atlanta allowed me to hone these skills with some of the best mentors in the South East. OneBiteATL was featured at the Creative Loafing Best of Atlanta event in September 2016 as part of the Award Winning Culinary Incubator, The Global Grub Collective. I also had the honor of being a featured Chef at the October 2016 Cochon555 Global BBQ Festival in Atlanta and had the opportunity to showcase my bestselling dish, the Hickory Smoked Pork Belly Bao. I accomplished these things with the endless support and encouragement of my partner Francis (Frank) Marcone. I am a Culinary Fight Club, March 2017 Pork Tasters Choice Award Winner and the runner up in that event. On Thursday 13th April 2017, I won the CFC Best Georgia Taco Event, and subsequently a Golden Ticket to The 2017 World Food Championships. It has been an aspiration of mine for the past 4 years to compete in the WFC. On October 7th, 2017, I won Judge's 3rd Place for Best Atlanta Mac and Cheese at the Atlanta Mac and Cheese Festival. I will also be participating in Taste of Atlanta on October 22nd, 2017. In March, 2018, I won Culinary Fight Club: Things with wings competition. I will be launching my spice line: OneBite SPICES on November 11th. The first featured blend is The Master Blend. I have been working on this spice blend for the past 5 years and the versatility and quality of this spice combination is like none other. It will be an honor to share it with you. My goal is to continuously focus on fresh, one-of-a-kind dishes with international flare and multidimensional flavor profiles. My Culinary journey continues and I hope that everyone can join me on my latest excursion at OneBite ATL to experience the true meaning of the words “International Flavor”.