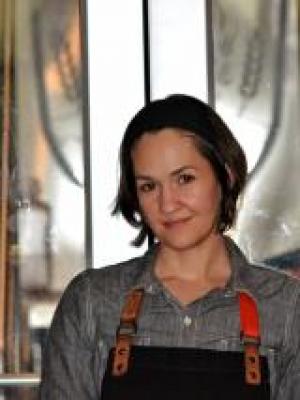 
Tamara Stanger, 36, has spent 22 years of her life in the restaurant business dating back to her teenage years working in the family restaurant in a small mining town in Utah. Much of her cooking style originated in traditional homestyle cooking, as well as processing game meats and wild edible plants, vintage heirloom pastries, and old world fermented bread. Tamara spent three years as a pastry chef and 1 year as executive chef in Arizona. Recently, she has been working with indigenous ingredients found in Arizona cuisine, priding herself in the desert culture and working to put Phoenix on the culinary map. Arizona cuisine is only half of the focus, the other end being craft beer and phasing out "bar food." Eclectic flavors and beer pairings occur regularly, if not religiously at Helio Basin Brewing under the direction of Tamara and Brewmaster Dustin Hazer. As a golden ticket holder, Tamara plans to use this outreach to spread awareness to the craft beer/craft food movement. Phoenix New Times "Top 100 Dishes" Blackberry Vinegar Pie at #33 2014 Winner of Arizona BBQ Festival's "Best Bacon Dish" 2014 Phoenix Magazine's choice of "Best Brewery Food" and Reader's Choice "Best New Restaurant" 2016 Beer Advocate's Top 34 Breweries out of 861 in the US "Class of 2016" Winner of the Devour Culinary Classic "Excellence in Taste" and "Excellence in Distinction" 2017 Yelp's "Top 50 Breweries in the US" at #30 Travel and Leisure Magazine's "Top Breweries in the US" at #13 Winner of the Scottsdale Culinary Festival "Best Food" 2017