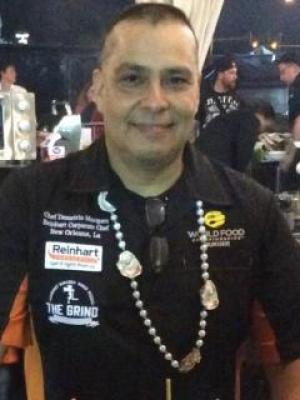 
Demetrio Marquez – Chef D\r\n\r\nDemetrio Marquez, aka Chef D, to his friends, culinary colleagues, and restaurateur’s on the Mississippi gulf coast. Chef D was born in Ft. Worth, Texas, and as a kid, cooking with his grandma and living on a farm/ hunting with dad was the earliest experiences cooking farm to table. Chef D, began working in the Food/Beverage industry at the age of 15 in the role,” Dishwasher”. This was the first stepping stone in the kitchen were all notable and rising star chef could reflect their early beginnings in the kitchen. Chef D worked as an apprentice under many highly credential Executive Chef , becoming certified as” Chef D’ Cuisine” from the American Chef Federation by the age of 24. \r\nChef D, has 30 years of professional culinary experience cooking, instructing and leading as Executive Chef with several major Hotel Resorts such as the Radisson, Renaissance, Sheraton, Hyatt Regency, Loews and Stouffers corporations, Fine Dine restaurants, Country Clubs and Health- care groups in the southeastern region of the state. Additionally, Mississippi Gulf Coast Casinos such as Boomtown, Hard Rock and The Beau Rivage have all enjoyed his culinary expertise.\r\nChef D was the former Chef and Owner of a successful Southwestern cuisine restaurant in downtown Ocean Springs ,Ms named \"Chile Poblano\". He is proficient in many cuisines such as World Fusion, Pan-Asian, and Classical French, Central and South American, Italian and Regional American Foods. He was noted to instruct at the University of Southern Mississippi in the Culinary Program as Chef Garde Manger.\r\n\r\nHe has catered to many Country music celebrities from \"The Mandrel Family to Loretta Lynn\". He is a ranked competitor in many American Chefs Federation food Challenges. \r\nChef D, is currently the Business Development /Corporate Chef of Reinhart Food Service, New Orleans Division. His responsibility is to develop and consult with restaurants, muti- units groups and new prospects with technology, trends, concepts and food products offered by Reinhart Food Service. \r\n \r\n