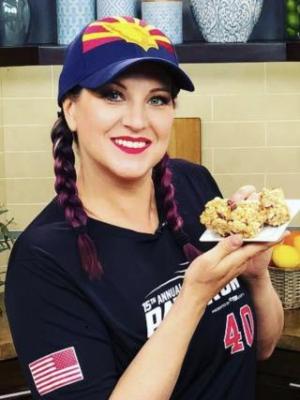 
After her son was born in 2010, Heather Walker began to pursue her passion for cooking and baking by competing in local and national food competitions. She has since won over $100,000 in cash, prizes, worldwide travel, television appearances and print publications. In 2014 and 2015, Heather finished as a top five dessert finalist at the World Food Championships, an achievement that earned her a commendation from Arizona Governor Doug Ducey. She made her Food Network debut in October of 2016, where she won $15,000 on the pilot episode of Bakers vs. Fakers. In 2017, she quickly followed up as one of the nine finalists on Season 3 of Food Network's Spring Baking Championship. In January of 2019, Heather and her mother Debbie had the honor of appearing on the Discovery Family Channel's new show, "Bake It Like Buddy." The show featured family duos baking against each other at Carlo's Bakery in Hoboken, New Jersey for cash and prizes. Heather and Debbie WON the "Sandcastle Cake" episode, judged by none other than the "Cake Boss" himself, Buddy Valastro! ​ In May of 2019, Heather made yet another Food Network appearance with Buddy Valastro on a show called "Bake You Rich." As the show's winner, she became Buddy's new business partner, selling her signature dish, the "Stuffed Chocolate Cake" on www.carlosbakery.com. Heather is a regular contributor to 3TV's Good Morning Arizona as a family food expert and regularly publishes recipes on her blog, www.PhoenixFamilyFoodie.com. Her culinary arsenal contains over 300 recipes, with multiple print and video publications for restaurants and international food brands. Cakes, cupcakes and specialty desserts are Heather's biggest competitive strength and her deepest culinary passion. She started Cake Doll in January of 2017 in order to share her love of sinful sweets and sassy style with all of the greater Phoenix area. ​ "If you love to laugh, act like a KID and throw AMAZING parties, then we should probably hang out. I'll bring the cake!" - Heather