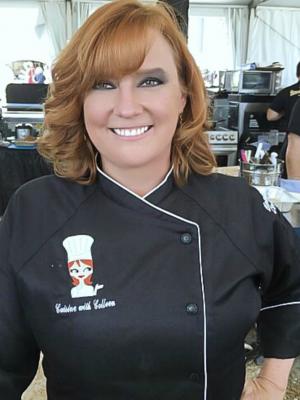 
To those who say I’m coming back to Gulf Shores to “defend” my World Bacon Champion title – you’re wrong. I’m not on defense, I’m on offense! At WFC-2015, the goal was Top 10; I took 2nd Place, in my first year. At WFC-2016 the goal was Bacon World Champion, goal accomplished. This year I am back to win the Final Table grand prize of $100,000 – and the third time’s the charm! I am a fierce competitor, but more important, I am an exceptional chef; “I’m good at what I do”, that’s what the video says: https://www.youtube.com/watch?v=dRRQbG5EHJo&feature=youtu.be It’s not smoke and mirrors that got me here – well maybe some smoke – it’s hard work. The clients of Cuisine with Colleen www.cuisinewithcolleen.com can attest to my passion for food and for excellence. This year, my Sous Chef will not be my son John, but my daughter, Katie. John won People’s Choice at the Burger Bash in Michigan this year, and won a Golden Ticket to compete against me in Burger. I look forward to seeing him at the Final Table, and teaching him a little more about cooking! There’s a passion that burns under this fiery red hair! Follow me to the Final Table at: https://www.facebook.com/colleen.cuisine.9