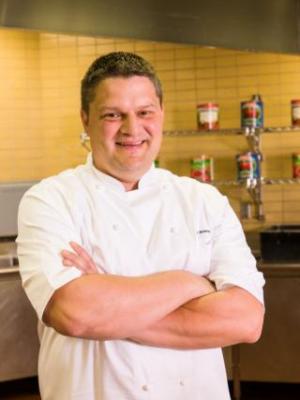 
Jason Bowers’ hometown is Kirksville, Missouri, his father is an art teacher, and additionally his father had a stoneware pottery business. This educational and artistic background has taken a small town boy to the East Coast and back again to the Midwest. \r\nJason grew up in a family of excellent cooks who had a variety of styles and talents. He was drawn into the food world during junior high, taking his first cooking class in seventh grade, and then testing his creations out on family members. His grandfather nurtured this interest in the kitchen. Together they spent hours watching cooking shows on television; then they would discuss, modify, and test recipes. His first job, at age 16, was flipping steaks at The Golden Corral, followed by a stint with The Ponderosa. His career has evolved from there.\r\nAfter receiving his Associate Degree in Culinary Arts in Ottumwa, Iowa, Jason, his wife, Tiffany, and infant son, headed to Providence, Rhode Island. This time Jason’s goal was an Associate Degree from the famed Johnson and Wales Culinary School. This was a time of growth for the family not only academically but culturally, too. Jason remarked, “This was the first time I had experienced “real” seafood and fresh fish and true Italian and Greek cuisine.” \r\nUpon graduation from the prestigious Johnson and Wales University, Jason and his family were ready to move closer to home. His first job was upgrading and managing a country club restaurant in Kansas, followed with two sous chef positions, one in Arkansas at a major convention center, followed by a return to Iowa to work in a historic hotel with a Master Chef trained in Sweden.\r\nIn 1999, Jason, Tiffany, and their two sons arrived in the Kansas City area. Jason started at Dean & DeLuca, in Leawood, as an executive sous chef working his way up to executive chef in just four months. In 2003 opened Café Trocadero, which won “Best New Restaurant in Kansas City 2003”. His future plans are to continue to refine and expand his skills. He reflects on his numerous opportunities to learn from others and to share his talents. “Each colleague has offered opportunities to experience different training\'s, family backgrounds, and secrets of the trade, I am inspired to always grow and create the best product possible for clients, patrons, and family,” reflects Jason Bowers. My skills learned in the past would help me a great deal in training young Chefs to prepare for the culinary world that awaits them. \r\n