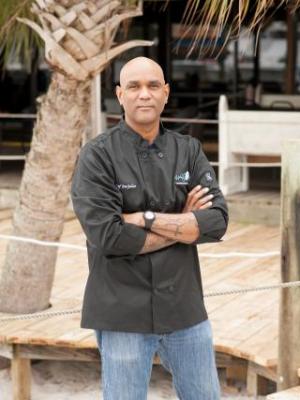 
Ira Gallon is a food naturalist. He loves serving simple foods in dramatically flavorful ways. The Queens, New York native creates deeply satisfying dishes as the Executive Chef at Wolf Bay Lodge in Orange Beach, Alabama. He also utilizes his creative yet approachable cooking style as the Directing Chef for their Catering Department. Ira’s love of cooking began watching his mother in the kitchen and was ignited at his first job, the Dine-O-Mat, a fifties-style restaurant in the heart of Manhattan. After his teens his culinary journey expanded across the United States where he worked alongside world-renowned chefs including Chef Norm Van Aken in South Beach, Miami and Chef Bradley Ogden at both Lark Creek Inn in Larkspur, CA & One Market Restaurant in San Francisco, CA. In 1994, he became the Chef de Cuisine at White Oak, an exclusive plantation located on the St. Mary’s River in North Florida that served as a quiet retreat for a myriad of world leaders and artists. After five years at White Oak, Chef Gallon and China Grill Management (CGM) joined forces where his culinary expertise meshed with his innate entrepreneurial skills allowing him to play an integral role in the opening of their two debut locations in Fort Lauderdale, Florida and four additional CGM concept restaurants within Mandalay Bay Resort, Hotel and Casino in Las Vegas, Nevada. He soon became known in the “City of Lights” for his exquisite culinary talent and keen business sense for restaurant startups; thus being recruited by The Charlie Palmer Group to serve as Executive Chef for their prestigious Stirling Club in Las Vegas and to eventually assist in their opening of the Joule Hotel in downtown Dallas, Texas. He later moved to Hollywood, Florida where he served as Consultant and Executive Chef for the Hard Rock Hotel and Casino overseeing their Park Sports Club and Tequila Ranch restaurants. Chef Ira’s culinary journey eventually led him to the Gulf Coast of Alabama where he served as Chef of the Sunset Cork Room and then as Executive Chef for The Hangout restaurant. While at the Hangout, he helped direct the major food service outlets at their nationally acclaimed Hangout Annual Music Festival and numerous marquis events. He eventually established his roots at Wolf Bay where people now travel from near & far to taste the flavorful masterpieces of this culinary genius. While Ira shines in the kitchen, he is a genuinely humble guy that enjoys spending time with his four children. True to his hometown roots, he is an avid New York Giants and New York Mets fan and can be found during their prospective seasons cheering his beloved teams to victory.