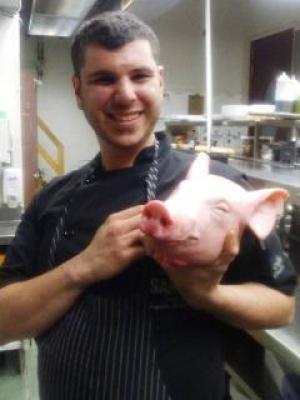 
Ben has been cooking his whole life. Starting with his fathers chain restaurant at a very young age, it was only natural for him to pursue a career in the restaurant industry. Ben has worked at several high profile restaurants around the Greater Toronto Area. Ben Currently resides as Head Chef of Sarpa Restaurant in Oak Ridges, Ontario, one of Toronto's top tables. Ben's passion for BBQ started to grow over the last 8 years and he started competing in the KCBS circuit 2 years ago with sister restaurant Rusty's competitive team Rusty's Smoke BBQ, under the tullidge of Executive Chef Stephen Perrin. Since then, Perrin has passed the reigns of Pit Master on to Ben. Since his induction as Pit Master of Rusty's Smoke BBQ, Ben has flourished winning multiple accolades.