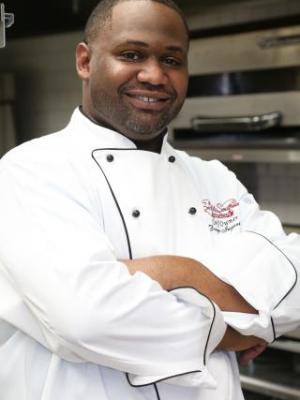 
Originally from Boothville, Louisiana, Dwayne Ingraham was formally educated at New England Culinary Institute receiving an Associates in Occupational Science in Baking and Pastry. Dwayne honed his pastry and plating skills in Sarasota at The Ritz Carlton Sarasota before moving to Las Vegas to work at MGM Grand and Wynn Las Vegas. FOOD & WINE’s The People’s Best New Pastry Chef Nominee 2012, Dwayne recently won Food Network's Cutthroat Kitchen in February 2015 and was a finalist on Food Network's "Spring Baking Championship." Dwayne was the Executive Pastry Chef of John Currence's City Grocery Restaurant Group, in Oxford, MS, providing the pastry program for weddings and special events with The Main Event Catering as well as all dessert menus at City Grocery, Snackbar, Bouré and Lamar Lounge. Dwayne is now the proud Chef/Owner of his own bakery/cafe called Sinfully Southern. His style of food has southern flavors with a modern twist and focuses on an elegant presentation. His philosophy is that he believes that dessert should be an experience that we participate in with others. Dessert is a privilege not a necessity and something that we should appreciate the art of, utilizing local flavors and inspiration. He wants this experience to be an emotional one, bringing the consumer to a place, to people and to a memory from their past. His specialty or signature is designing plated desserts and the art he can create therein.