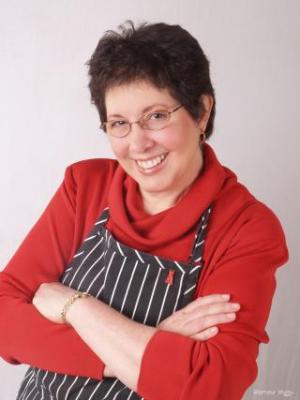 
Born in Brooklyn, raised in Jersey – Suzanne has eclectic tastes in cooking and eating. As a dedicated home cook, she’s entered lots of diverse cooking competitions and won or been a finalist in more than three dozen national contests. Some of her more decadent wins were grand prizes in Sutter Home’s Build a Better Burger and Junior’s 60th Anniversary Cheesecake Contest. But she’s also won prizes for gluten-free baking, vegetarian dishes, and beet, plum, fig, strawberry, watercress, yogurt, tofu, chicken, egg and salt cod recipes. Just hand her an ingredient and she’ll try to make something delicious with it! Suzanne’s recipes have been published in annual cookbooks from Taste of Home as well as in books like ATK’s Grandmothers’ Kitchens, Junior’s Dessert Recipes and the Barnes and Noble Cookie Bakeoff. They’ve been featured in Cooking Light, Wegmans Magazine and a half a dozen Taste of Home issues. She has appeared on The Today Show and on Healthy Flavors on PBS, and been a guest on radio shows like A Chef’s Table, Martha Stewart Living Radio and Montel Williams. This year, Suzanne is excited to be working with her husband, Ed and their best friend, Susan Sodon, as an All-Jersey Cooking Team!