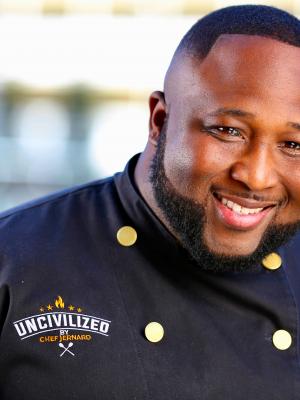 
Jernard Wells is a James Beard house Honored Celebrity TV Chef and Bestselling Cookbook Author with over 6 books published, best known from numerous Food Network shows over the last 9 years; "Chef Wanted", "Food Network Star", only 2X winner on "Cutthroat Kitchen", "Comeback Kitchen" and as a judge on "Chopped Jr" Wells has now been added as a Co-Host for cooking channel #1 show “Best Things I Ever Ate” and the new Host of Cleo TV Network show “New Soul Kitchen” He is affectionately known as the "Family Chef aka Chef of Love" because he uses food to unify people and spread love. His signature line of cooking sauces and spices - Le Chef Armour's Haute Cuisine Inc. are sold in over 600 stores in Whole Foods, Winn-Dixie, Bi-Lo and on www.ChefJernard.com. Wells has worked with Paula Deen, Tyler Perry, Lady Antebellum and Ricky Bell, Mike Bivens & Bobby Brown of New Edition/BBD. Wells has been featured on The “Today Show with Katie & Hoda” "Steve Harvey Morning Show", "Tom Joyner Morning Show", ESSENCE, Black Enterprise, "HARRY" and HLN to name a few. He and his wife of almost 20 years live in Atlanta with their 9 children. Follow him on all social media at @ChefJernard