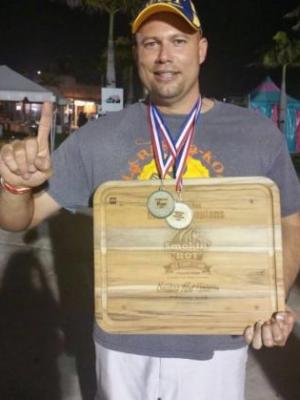 
Since childhood I liked the BBQ for my father. I started preparing BBQ in the back yard of my house. When I became an adult, I started visiting the first competitions of the Caribbean BBQ, but was only going to observe. In 2014 I decided to try my luck winning second place in wings. The I competed in several private competitions winning the Grand Champions. I have competed in the categories of ribs,pork,brisket,hamburger,chicken,wings,seafood and dessert. For the year 2015 I competed in the Smokin\'\' Hot BBQ competition winning first place in chicken wings. In 2016 in Smokin Hot BBQ in San Juan, P.R. win again first place in wings and got the Anciliary Gran Champion. In Smokin Hot BBQ in Mayaguez,P.R. I won first place in pork shouder,second in hamburger and third in overall. \r\n