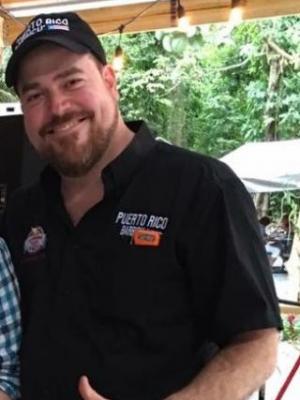 
Im a Pitmaster since 2013 and an Orthopedic Tech. since 1996. My hobby is to Smoke and Grill. Since I became a Pitmaster I stared grilling and smoking for my family and friends in the backyard of my house. At that point it became an obsession and we had BBQ parties almost every weekend to get the taste and qualilty we wanted. In 2014 was our first competition with my team, which is composed of my family members, on the Cattlemens BBQ Competition on San Juan PR. It was a great beginning on the grilling and smoking world for our team. On 2015 we went to the Smoking Hot Competition and won the second place on Beef Brisket category and had a great overall results. Also on the same year and category we won second place at the Palmas Station BBQ Competition. This year in the Smoking Hot BBQ Competition 2016 we won the Build a Better Burger category and got the privilege to became a qualified competitor for the WFC 2016. I also own the first Smoke House Rest in Guayanilla, Puerto Rico, it is called La Manada Ribs V8 The Place.