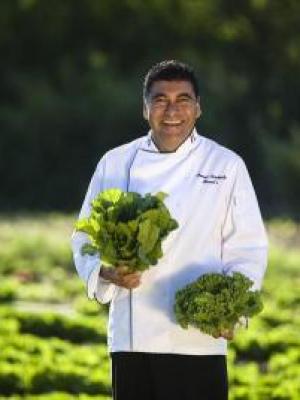 
Manuel Arredondo’s celebrated culinary career began in the early ‘80’s when he moved to Southern California from Guanajuato, Mexico. Just eighteen, he started as a trainee at a Hilton Hotel and immediately realized his professional calling. In the ensuing years, Manuel’s talent shone as he rose to become a leader in the corporate culinary field – presiding as Executive Chef in several prestigious hotels/restaurants and Corporate Chef for one of the largest corporations in the United States. During this time, Manuel was responsible for executing banquets at landmark events, including President George H.W. Bush’s 75th and 80th birthday galas, Super Bowl XXXVIII, the 2000 Republican National Convention, Major League Baseball All-Stars in 2004, the 2000 World Series at Shea Stadium and the Olympic Games in Barcelona and Atlanta just to name a few. After twenty-five years in the corporate world, Manuel yearned to experience life abroad. He moved to Colorno, Italy to study at the acclaimed La Scuola Internazionale di Cucina Italiana (ALMA). Not only did Manuel graduate as a Certified Master Chef in Italian Cuisine; but, he was closely mentored by Chef Gualtiero Marchesi, rector of the college and the first Italian chef in history to receive three Michelin Stars. He was also fortunate to work under renowned Chef Walter Eynard at Flipot, a two Michelin Star restaurant in Piedmont, Italy. Following Italy, Manuel returned to Mexico to create a place uniquely his own. The first Manuel’s Creative Cuisine opened in the historic town of Ajijic in Chapala, Jalisco in 2007. An immediate success, the restaurant was a favorite of the community, lauded by dining guides, and rated “Best Restaurant” by the state newspaper, El Mural. Ready for a new challenge, Manuel decided to bring his concept to Los Cabos area. Manuel’s Creative Cuisine opened at The Shoppes at Palmilla in March 2009, Dedicated to bringing clients a truly unique and delicious dining experience. Manuel’s private chef services and special catering events for high profile clients is one of his biggest passions, during his career, he has cooked for many celebrities and personalities at the comfort of their homes. A dining experience like no other, Chef Manuel strives to make every aspect of dining original, focusing on local organic ingredients, clean presentations, and an unrelenting imagination. Manuel is currently serving as a consultant corporate chef for the Baja Cantina Group and oversees the Baja Cantina Playa in Medano Beach, Baja Cantina Marina, Maria Corona, Tiki Bar, Manuel's Private Events and three new projects for 2016.