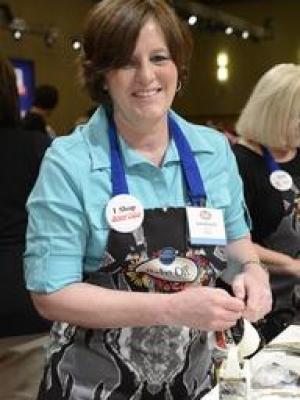 
Julie has always had a passion for food. She loves to cook, bake and experiment in the kitchen. Julie began competitive cooking in 2010 and, since then has become a 3-time Pillsbury Bake-Off Contest finalist and has competed in several major cooking competitions, including Beringer Great Steak Challenge, Kozy Shack Recipe Showdown, Macy’s Grilling Guru, NatureSweet Chef’s Challenge, and the very first World Food Championships in 2012, placing in the top 10 sandwich finalists. Julie has also won or placed in multiple recipe contests, including Mezzetta’s Make that Sandwich Contest. Julie placed in the FoodChamp Challenge – Recipe, earning a spot in the 2014 World Food Championships, thanks to Kenmore. She also placed in Reser’s “America’s Best Potato Salad Challenge top 10, winning a spot in America’s Best Potato Salad Challenge final, a featured competition at the 2014 World Food Championships. This year she is happy to compete again as The Ultimate Celery Champion representative for Dandy Celery - Duda Farm Fresh Foods.