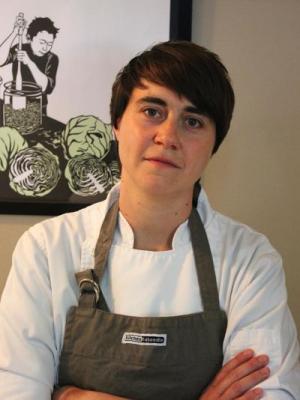 
Chef Doreen Prei apprenticed in a 1 Michelin Star Hotel Restaurant in Berlin. Her drive to learn led her to numerous kitchens in Dublin (Chapter One, 1 Michelin Star and The Gordon Ramsay Restaurant in the newly opened Ritz Carlton in 2007). There she learned the art of butchery, both fish and meat. After 2 years in Ireland her path took her to Edmonton, Canada where she started as Restaurant Chef in the Harvest Room ( Fairmont Hotel MacDonald). Chef Prei then helped open the new Restaurant Zinc at the Art Gallery of Alberta as Chef de Cuisine. She was then head hunted to work for the Edmonton Petroleum Club as Head of Culinary Development. Chef Prei is now working as a private chef and is a food columnist for CBC Radio Active and Muse at CKUA. Chef Prei competed in the first season of Chopped Canada and placed silver at the Gold Medal Plates in 2013 in Edmonton.