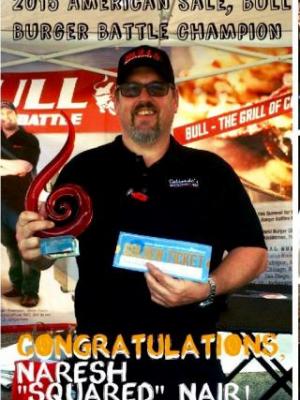 
Naresh "Squared" Nair started his life in the restaurant business as a teenager, working under the tutelage of his mother and grandmother at Chicago-area restaurants and cooking schools. He has performed every job in the hospitality field, from busboy and dishwasher to server and bartender to manager and trainer. Currently Naresh is employed at Caliendos Restaurant and Bar in Winfield IL. Where he is in charge of all aspects of the restaurant of managing a great family owned Italian restaurant. Naresh started his professional career with the Cactus in 1989; and, along with its owners, he helped build this Chicago restaurant into the popular bar and grill it is today. Twenty years in the restaurant Business Naresh was the director of events for The Cactus, as well as two establishments he had ownership interest in; the upscale Martini Bar that opened in 2003; and Franklin Tap, a sports bar and restaurant that opened in 2007. Naresh’s primary responsibility was to plan and execute the private events for all three establishments. These parties, for 20 to 500 people, include corporate clients like Crown Imports Inc that distribute Corona Brand Beer, Boeing, Blackman Kallick, CME Group, GATX, Miller Coors, USG and many more. In his more than two decades in the business, Naresh has earned many awards, including a first place in “Chicago’s Best Chicken Wing” competition. He’s also been featured in Metromix Chicago for best “insane” wing sauce recipe, as well as Chicago Tribune Magazine for his “Great Bowl of Chili” recipe. In addition, he was featured in a New York Times story about how the economy has affected the bar and restaurant business. Naresh has also appeared in other Chicago media outlets, including television morning news shows, after he participated in the Red Bull Flutag flying competitions in 2003 and 2008 and 2013. Despite his years of experience, Naresh continues his professional education. He has taken numerous management classes with the National Restaurant Association and completed three years of training with the Chicago Wine School. He is also a certified food service manager and alcohol server. Outside his professional world, Naresh is a member and instructor of the Community Emergency Response Team for Milton Township; and member of Christ Our Savior Lutheran Church in Winfield. He has written a weekly food column for a local paper and taught food and beverage classes for the adult education department of College of DuPage. In his spare time, Naresh loves to experience new foods and places while traveling with his wife Christina and daughter Samantha. You can contact Naresh by email at igtbks@gmail.com