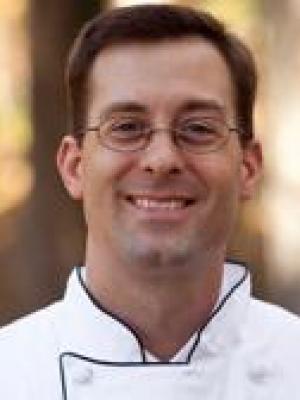 The Community Table; Carolina Dining at the University of South Carolina


When I was young, I always liked to cook, from meals for the family to baking muffins after school in a bakeshop, to working in the kitchen at Lake Hickory Country Club. I knew early on that cooking was what life had planned for me. In 1999 I graduated from Wake Tech with a Culinary Arts Degree, during which time I worked at 518 West Italian Restaurant in downtown Raleigh, NC, The Fox and The Hound in Cary, NC, and was able to do internships abroad in France. Upon graduating from Culinary School, I found myself wanting more so I enrolled in the Nutrition and Foodservice Management Program at the University of North Carolina at Greensboro where I attained my BS/BA degrees in 2004. In this time I worked for the Grandover Resort and Conference Center in Greensboro, NC at the Divaletta Restaurant a 4 Star, 4 Diamond awarded destination. I soon moved to Aramark where I found my passion and calling in food service working for Aramark Dining Services at the University of North Carolina at Greensboro and many other University and College accounts within the Aramark Higher Education Division as an Executive Chef. But as my career grew and my knowledge deepened, I again wanted more from my career. I finally found Sodexo Campus Services at Gardner-Webb University. Sodexo gave me the drive and focus to always be "In it to Win it" with all I do. At this point I knew I was ready to take on the biggest and the best account within the Sodexo Campus Services family, Executive Chef at the University of South Carolina. My passion is to Love Food, People, and Serving Others in a sustainable way that makes a difference everyday!