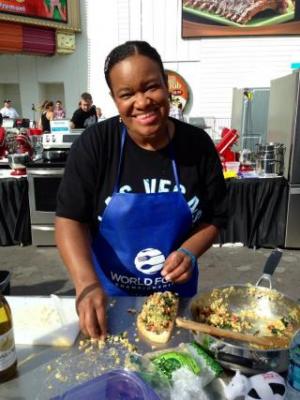 
How does the saying goes? Third times the charm? That's what I'm hoping for as I compete at the 2015 World Food Championships-World Sandwich Division for the third time. I've been in the top ten for the past two years and excited to see what the future holds for this year. I am originally from New Orleans yet living in Carpinteria, CA for the past 7 years. My palate is deeply rooted in Southern Louisiana culture, food, and music, which inspires me to be creative yet maintaining the unique taste of New Orleans. I've been competing in food competitions for the past 5 years in the local and national level. I've won competitions in sandwich, bbq, and chili; was filmed in the 2013 World Food Championships" on FYI network in the Sandwich Competition and on the Today Show live for the June 2013 "Father's Day Burger Battle" with Giada DeLaurentiis as the judge. My food journey has been exciting and thrilling. I can't wait to see old friends, make new ones, and be among talented chefs; both amateur and professional as we give it our all at the 2015 World Food Championships in Kissimmee, FL. With much foodie love, L. J.