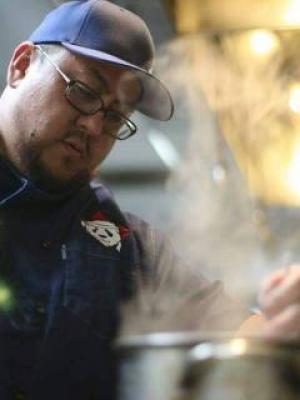 
Chef Keoni Simmons Southern California native Keoni Simmons discovered his passion for cooking when he was just eight years old. He loved baking cookies and casseroles, but his go-to chili con carne foretold a future in BBQ. Before assuming his current role as executive chef at BBQ House Bar & Grill, he was executive chef and chef in a variety of kitchens including Steele Canyon Golf Club, Gordon Biersch, Viejas Casino & Resort, The Field Irish Pub and Sushi On a Roll (SOAR). In 2014 he established Kalaheo Food, LLC. Its first retail product, Hungry Chef BBQ sauce, is Simmons’ own creative blend of spices, locally-sourced ingredients and hint of Hawaiian culture. Often pairing familiar flavors in unexpected ways, Simmons refers to his cuisine as California comfort food – mostly Pacific Rim ingredients, fresh and not necessarily healthy. He credits his cooking style to growing up with cultural family traditions such as Hawaiian luaus and holiday tamales, and to his father’s ability to walk into a kitchen and make delicious meals with whatever ingredients were on hand. Simmons believes food should be playful. His goal is to create food that makes people smile – the kind of smile that appears when a person is enjoying a meal so thoroughly they’re at a loss for words.