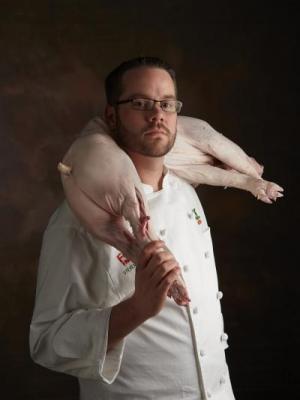 
Chef Steven Grostick Biography Food Fanatic Culinary Consultant Chef at US Foods Detroit, an award winning chef with 20 years of experience as a progressive culinary professional. Born and bred in Michigan, Chef Grostick’s Passion for cooking was ignited at an early age in his family’s kitchen. He went on to earn a Culinary Arts Degree from Livonia’s Schoolcraft College, where he quickly found his niche in butchery and charcuterie. Chef Grostick honed his culinary skills as the Executive Chef of the award-winning Five Lakes Grill in Milford, Michigan, where he studied and trained under James Beard nominated Chef Brian Polcyn for 11 years. Chef Steven continued on to re-brand the Baronette Renaissance Hotel Detroit/Novi in 2009 and opened Toasted Oak Grill & Market, a chef driven brasserie focusing on Pasture-to-Fork menus. Boasting an “old world” hand crafted charcuterie and cheese market as well as a wine shop, Toasted Oak offered a wide range of Michigan and Mid-Western menu items. Chef Steven established many relationships with local farms and purveyors crafting artisanal food products in which he continues to use in his menus. Chef Grostick is also the resident Chef at Milford’s Acorn Farm Kitchen and Gift Store, hosting cooking classes on a regular basis geared towards the home cook. As the Food Fanatic Culinary Consultant Chef for US Foods Detroit, Chef Grostick shares his passion for food to inspire business success with Michigan’s finest dining establishments. Under Chef Grostick’s leadership, Five Lakes was named “Restaurant of the year” in 2005 by the Detroit Free Press. Toasted Oak Grill & Market was named “Best of Detroit” by Hour Magazine in 2010. Chef Grostick took his passion for Michigan Farms to the James Beard House in 2011 and created the “I cook Michigan” meal featuring Michigan made products throughout his menu. Chef Grostick has been involved with several local food charities, including Gleaners Community Food Bank of Metro Detroit, Crush Birmingham, Schoolcraft Culinary Extravaganza, and many more. Chef Grostick was featured in the pilot episode of Great Lakes, Great Taste a television series focusing on the heritage of Michigan foods and food producers. In his spare time, Chef Steven helps to raise livestock at Wordhouse Farm in Belleville Michigan, where he assists in raising the animals, harvesting, conducting homesteading classes and produces artisanal charcuterie items.