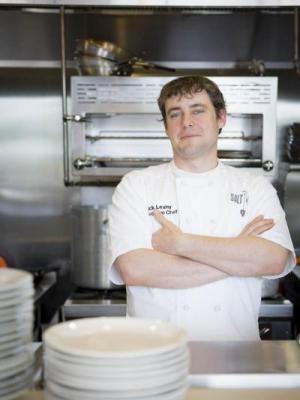 
I was born in Bermuda and grew up in England before moving to Atlanta in elementary school. My mother is half-French, so I was exposed to a broad range of foods from an early age. My earliest food memory is eating duck confit in Southern France, and I was immediately hooked and knew that I wanted to be a Chef. I began working in the restaurant industry in high school and later attended the Art Institute of Atlanta. Over the last ten years, I have worked for some of Atlanta’s biggest restaurant groups, including Fifth Group (Food Studio) and Concentrics (Two Urban Licks, Stats, and Parish), as well as, some independent restaurants. In 2011, my wife and I left Atlanta for a big adventure. We traveled (and ate…lots and lots of eating) all around Europe and parts of Africa for about 6 months, following which, we settled in London for a year. In Central London, I became the Executive Chef for Daylesford Organic, a restaurant and farm that produces homegrown, organic ingredients, including fruits, vegetables, dairy and cattle. I am a huge proponent of small, organic, local and artisan producers, not just from a culinary point of view, but an environmental and economic one as well, therefore my cooking style tends to have a heavy emphasis on this. Although my time in England was great, it wasn’t long before my wife and I missed our family and the sunshine and decided to return to Atlanta. Shortly after returning, I became fortunate enough to team up with Kristy and Christian Favalli on our current project, Saltyard, a small plates concept. We chose the name Saltyard because salt used to be such a valuable commodity, that in ancient times sharing salt with a guest was a sign of hospitality and friendship. We wanted to create the same hosptiable atmosphere at Saltyard. It's a social interactive dinner both between our staff and the guests, but also between the guests themselves as they share a variety of small plates and tastes together throughout the evening. Outside of the “professional” kitchen, the things that I truly enjoy are cooking for my wife, hiking, and spending time with my two dogs.