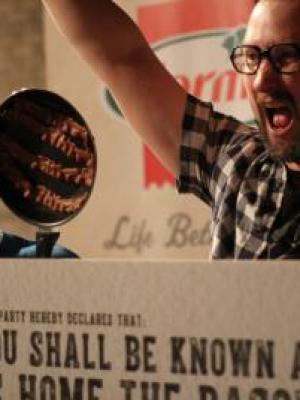 
It wasn't until college that my love for cooking began to truly take form. While attending Ohio University and working in the kitchen at The Pub - a local food & drink establishment in Athens, OH - I discovered a passion I never knew existed for cooking. Granted this wasn't a glamorous culinary venue by any means but it was where I realized that cooking was going to be a special part of my life. It didn't take long for this passion to evolve and soon thereafter I was exploring different ingredients and creating recipes from scratch. I found myself dedicating any free time I had to learning about the culinary world; reading cookbooks and experimenting in the kitchen. The Pub kitchen is where I met my teammate and close friend, Kevin, who also shares a unique passion for cooking (especially bacon) and creating our own recipes. After winning the Chicago Bacon Takedown we are humbled and honored to be competing in the Bacon World Championships this year. When I'm not in the kitchen I am at the ice rink where I coach a high school ice hockey team in the suburbs of Chicago. Our players have served as excellent taste testers for some of my culinary experiments. Go New Trier Blue!