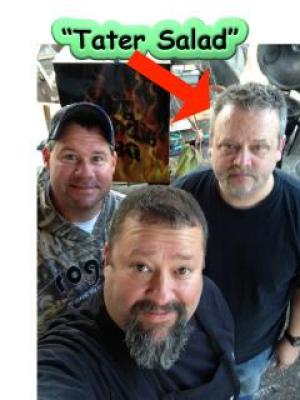 
Jeff White and Jim Tyson formed Big Woodie BBQ Competition Team in 2008 with a rotating third and sometimes fourth team member. William Wilson joined the team in 2011 and the three have continued to cook together ever since or at least when it's convenient for William to join Jeff and Jim. The first couple of years were rough, let alone there is a huge learning curve to competition bbq, but the competition in SW Missouri is some of the toughest on the circuit and it didn't help that the trio also tried to win the party on Friday night at each event. After a couple of years and millions of dollars spent (at least it seemed like millions) the trio finally realized that there was no way they could win the party on Friday night and expect to win the contest on Saturday, with that sobering breakthrough the team set out to find the perfect recipe for having a good time AND being competitive and things started to click. In 2012 they started winning awards for their food and increased the number of awards in 2013 and have won many awards in every KCBS category ever since, including a Grand Championship at the Springfield, Mo. Downtown Party Gras! Cajun Cookoff. The team entered America's Best Potato Salad Challenge at Rock n Ribs in 2013 (actually Jeff entered and the other two team members laughed at him) and finished in 2nd place! So, when Rock n Ribs rolled around in 2014, nobody was making fun of Jeff and we entered again and WON the Challenge and the opportunity to compete at the WFC in Las Vegas! We Love potato salad!