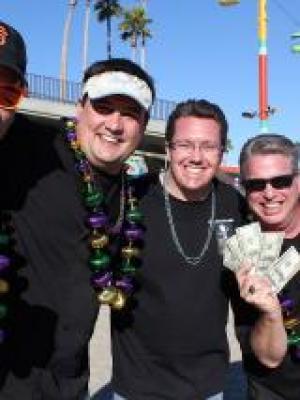 
.Wine With Swine Competition BBQ Team was borne out of a brotherhood of Masons, as a hall-pass for a bunch of married guys and vagabonds to get out a few times a year to bust loose in the name of culinary genius. What started as a Competition BBQ team in 2010 quickly expanded into Chowder and Chili Cook-Offs as well, mainly to increase the number of hall-passes being doled out by an ever-increasingly supportive group of “better-halves” as the awards started racking up. While wins in BBQ competitions have been a little more spread out, Wine With Swine found a niche in Chowder and Chili, with Rookie-Year wins in both: 2nd Place in Boston Clam Chowder at the 2012 Santa Cruz Beach Boardwalk Clam Chowder Cook-Off in February (which came with 15 seconds of fame on Yahoo’s “Blue Ribbon Hunter” show (see it here: http://a.blip.tv/blueribbonhunter/award-winning-clam-chowder-6210782...That’s US announcing the show right at the beginning, and then we get interviewed at 0:40 to 0:55) and 1st Place in Traditional Red Chili at the 2012 Santa Cruz Beach Boardwalk Chili Cook-Off in October of the same year. From those auspicious beginnings, Chili and Chowder have become our dominant arena for top finishes, with never less than a fourth place finish in any competition we’ve ever entered, three 1st Place ribbons in Chili: Two back-to-back at the Santa Cruz Beach Boardwalk and one at the Fremont Cook-Off in May, 2013, and one in Chowder (see below). This dominance in our local market has garnered invitations to two of the biggest events in Chili and Food: The 2014 Terlingua International Chili Championships (The “Super Bowl” of Chili), in Terlingua, Texas, and the 2014 World Food Championships in Las Vegas. When we first heard about the possibility of making it to the WFC in Vegas, we were told that we were “on the Short List”. A few days later, when we got the news that we were in, our Pitmaster, Mark Brown, inquired as to what the deciding factor was. The answer was that we were considered the more well-rounded team (and if you saw us, that would be immediately apparent!), due to our wins in other food competitions as well (namely, Chowder). Because in addition to our Rookie Year 2nd Place win in Boston Chowder at Santa Cruz, we followed that up with a 1st Place win in Manhattan Clam Chowder earlier this year. Here’s the kicker regarding that win: Pitmaster Mark, who is deathly allergic to seafood, created the Manhattan Chowder recipe the Wednesday before the event for the very first time!! Without even being able to taste it (his talented-taste-bud wife, Amy, provided the input), he created an Award-Winning pot of Red Chowder in his first swing at the plate, taking the first-place ribbon just three days later! With this meteoric rise to the top of the San Francisco Bay Area Competition Food Scene, Wine With Swine has high hopes to increase its presence by making a good showing at this year’s 2014 World Food Championships in Las Vegas, Nevada.